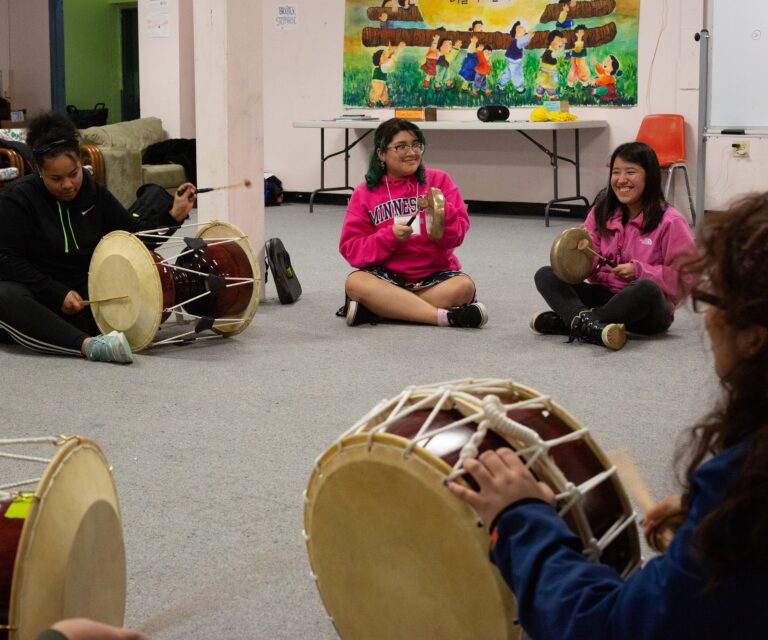 Inequality and Diversity, Not Universal Success, Marks the Economic Reality of The Asian American Community

Inequality and Diversity, Not Universal Success, Marks the Economic Reality of The Asian American Community

By most measures of economic success—whether it be income, education, wealth or employment—Asian Americans are doing well in the United States, both when compared to other communities of color as well to White households. But while these measures of success are noteworthy, the way they are collected, analyzed and presented all too often masks the disparate financial situations of the dozens of ethnic subgroups categorized as “Asian American.”

In fact, despite sharing few cultural similarities, and spread out over a vast geographical area, people from all over Asia are grouped into the same racial category—often with Pacific Islanders included as well. As a result, the experiences of communities such as Native Hawaiians, Hmong, Indian, Chinese Americans and many others, are categorized together, despite different social, economic and cultural backgrounds and vastly different pathways to coming to this country (e.g. indigenous, immigrant, refugee). Today, while the Asian American category allows for political solidarity and power for many, when we examine the economic indicators for the Asian American Pacific Islander (AAPI) community more closely, it becomes clear that aggregated data does not come close to telling the full story of these diverse communities.

With this context in mind, today—in partnership with Prosperity Now—we are releasing a new brief, The Economic Reality of The Asian American Pacific Islander Community Is Marked by Diversity and Inequality, Not Universal Success, that explores some of the misconceptions that feed into broadly held beliefs that all members of the AAPI community are part of one large homogenous and successful group.

For example, though the median household income for Asians ($87,194)—which is 1.2 – 2 times higher than Black ($41,511), Latinx ($51,404) and White ($67,937) households—suggests that these households are doing quite well, breaking down the data along ethnic lines complicates that implication. While some groups, like Indian households, are earning remarkably high incomes ($119,858), others, like Burmese households, are earning incomes ($45,348) comparable to those earned by Black ($41,511) and Latinx ($51,404) households. This pattern of vastly different economic statistics across AAPI subgroups is similar across a variety of indicators, including poverty rate, homeownership rates and rent burden, which when put together correlate with the fact of extreme economic inequality within the larger category of AAPI—an unfortunate reality that is too often overlooked. 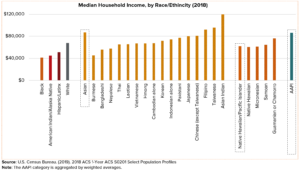 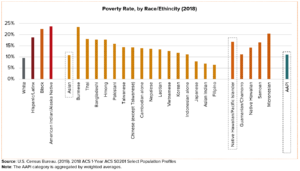 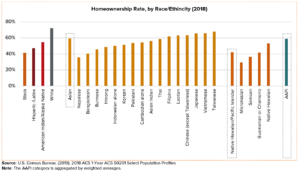 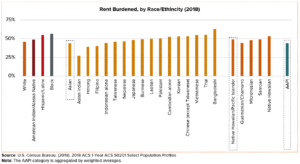 In part, this is the result of simplistic and harmful narratives that spun out of efforts during the 1960s by White Americans to stereotype Asian Americans as a uniformly successful and highly educated but docile “model” minority. Those efforts, which were used to discredit the demands of Black Americans by pointing to a “good” minority group, have gone on to fuel a myth that continues to both be used as a racial wedge issue and is frequently used to stymie systemic progress for other minority groups.

At the same time, this distortion is also the result of post-1965 immigration policy, which has fundamentally shaped the current Asian population (98% of which can be traced to post-1965 immigrants and their descendants). More importantly, these policies have privileged a small, specific subset of Asian immigrant workers – educated and ambitious, the types of people who would leave their home country to pursue careers in the economic sectors where America still leads (like tech, finance and entertainment). As a result, by sheer force of numbers, these immigrants have come to define economic statistics and the perception of their ethnic subgroups.

Further, in addition to perpetuating stereotypes and racism, these issues are made worse by aggregated economic AAPI data, which fuels a false generalization of an extremely diverse community of people. In turn, the assumptions that this identity group is already prosperous ends up harming underserved low-income and low-wealth AAPIs, causing the needs of many within the community to be ignored.

Ultimately, as with many other issues of economic inequality, the unrecognized economic needs of these communities can be best addressed through policies informed specifically by the diverse experiences of AAPI communities. And, while policymakers on Capitol Hill and throughout the country can enact a range of targeted policies to help reduce the inequities many face within these communities, one simple step that can be taken is to empower and instruct statistical government agencies to develop and expand upon existing capabilities to collect and disseminate disaggregated economic data. Doing so will provide academics, advocates and policymakers throughout the country with additional and necessary information needed to craft impactful, targeted policy to fight poverty and wealth inequality.

To learn more about some of the economic realities facing the AAPI communities, and how aggregated economic data and immigration skews the perceptions of this diverse community, check out our joint brief here.