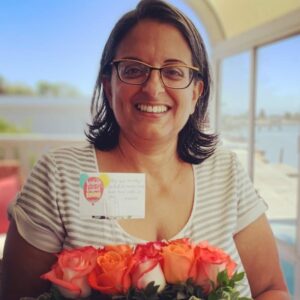 It is with heavy hearts that National CAPACD shares the loss of Darshan Khalsa, a former staff member, on the morning of December 13, 2021 at the young age of 48, after struggling to fight endometrial cancer diagnosed earlier this year. Darshan passed peacefully surrounded by loved ones.

She is remembered for her grace, good sense of humor, and tireless commitment to social justice. Darshan worked with National CAPACD for more than three years, during a critical period in its development. As recalled by our former Executive Director, Lisa Hasegawa, “Darshan served as the first Deputy Director of National CAPACD, serving at a time of critical growth and expansion for the organization. She was a fierce advocate, prolific fundraiser, and brilliant strategist, but I will remember her most for her wonderful sense of humor, and her deep belief that our movement organizations needed to be humanistic and healthy. She made a profound impact on so many organizations, often working behind the scenes, taking pride in the success of those she supported, coached, and mentored. She will be forever remembered and dearly missed by her National CAPACD family.”

Community in the Capital 2007

Darshan’s legacy lives on throughout the fabric of National CAPACD, as we advance a vision for the organization that she held firmly as not just being community-driven but community-led. We are thankful for all she brought to our organization and the broader movement.

Services will be held in Oakland next year. To honor Darshan’s legacy, we encourage you to donate to one of the following organizations: